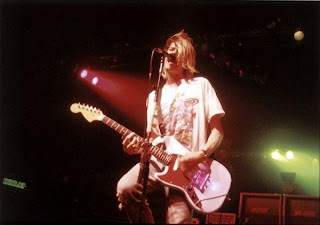 There were three sonic blue and one red Mustang built by Scott Zimmerman from Fender Japan. Two of the blue Mustangs along with the red Mustang were sent out in the In Utero tour. The other (third) blue one stayed at Kurt's house. The whereabouts of the third blue Mustang and the red Mustang are currently unknown.
5/12/09 Update
According to The Rock & Roll Hall of Fame there were 5 of these built for Kurt.
Not four as previously reported. Have any more information please feel free to contact me.
10/7/09 Update
At some point the In Utero Stangs will have their own dedicated entries.
This entry is specific to two sonic blue ones that were used on the In Utero Tour.
Blue Mustang #1 "Sky Stang III"
This guitar was referred to as "Sky Stang III" by Kurt, Earnie Bailey and John Duncan.
There were two other sonic blue Mustangs named Sky Stang I and Sky Stang II.
Blue Mustang #1/ Sky Stang III is owned by Recordmecca and it is on indefinite loan to the Rock and Roll Hall of Fame (RRHF) in Cleveland. The RRHF curator states that "the guitar is on display indefinitely near the entrance of the museum. At this time there are no plans to move it." It was given to a boy named Bobby Costello in Florida by Courtney Love in response to a letter he had written presumably to Kurt or Courtney. The boy's family sold the guitar to Recordmecca. It is rumored to have been sold to Recordmecca for approximately $17,000. Rolling Stone magazine reports that figure to be closer to the $100,000 mark.
Blue Mustang #2
Blue Mustang #2 is in a secured storage vault in Seattle, as seen in "Cobain Unseen".
All the items in the Seattle storage vault are owned by the Cobain estate (Courtney Love).
When asked by Rolling Stone where the vault was, Cross responded: "It's an undisclosed location. It literally was at an underground bomb-proof bunker that Bill Gates stored his stuff in. When I first went to visit it, it was the first time in my life my retina was ever scanned. It was like James Bond. The week Kurt died Courtney had the sense to tell someone "put all this stuff away" and it had all been boxed up and never opened. I think I was the first person to open these boxes — and I cannot tell you how freaky that was."
Blue Mustang # 2

Both of these Mustangs were modified by Earnie Bailey multiple times during the In Utero tour. The last modification in 1994 was the replacement of the bridge pickup from a DiMarzio humbucker to a Seymour Duncan Jeff Beck humbucker. The identifying factor is the fact the Duncan pickup is black. In most In Utero tour photos these guitars are seen with a white humbucker in the bridge position.
The easiest way to tell apart the two blue Mustangs apart is by the pattern of the tortoise shell on the pickguards. Blue Mustang #1 (Recordmecca/RRHF) has a yellowish spot right above the humbucker, underneath the strings. The other blue Mustang has a similar yellow spot in the tortoise shell guard, except it is to the left of the black humbucker. Also Mustang #2 has a nick on the strap side horn and sharpie marker markings on the selector switches. Mustang #1 does not.
More information on blue Mustang #1
From Recordmecca
"Kurt Cobain's custom left-handed Fender Mustang guitar, on loan to the Rock And Roll Hall of Fame in Cleveland, Ohio. This guitar was custom made by Scott Zimmerman, a custom luthier who does work for Fender in Japan. Cobain played it extensively on Nirvana's "In Utero" tour, and there are many photographs and videos documenting this. Courtney Love sent this guitar to a young Nirvana fan after Kurt's death. Her letter accompanying the guitar, the fedex receipt for it's shipping, and Scott Zimmerman's email detailing the exact history of this guitar (including its serial number) make this one of the best documented artist-owned guitars ever."
Pictured here is the guitar upon arrival in it's original case at The Rock & Roll Hall Of Fame. 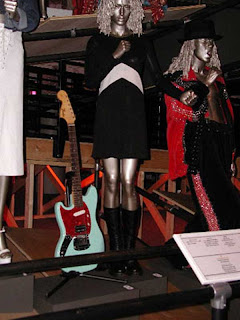 Above: Blue Mustang #1 at it's original display at The Rock & Roll Hall Of Fame.
After someone stole the volume and tone knobs, the guitar was then moved to a secured display by the entrance. 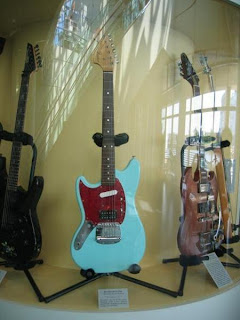 Initially blue Mustang #1 was put into this display knob-less. 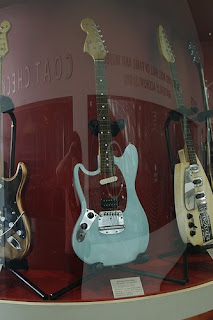 A more recent photo shows the guitar with new replacement knobs.
Bobby Costello and blue Mustang #1
Below are photographs from kurtsequipment.com of Bobby Costello after receiving the guitar from Courtney. In the case with the guitar is the Greg Sage tribute vinyl box set. 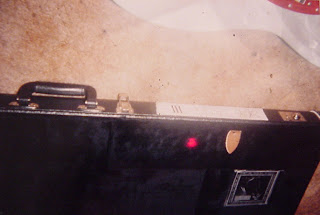 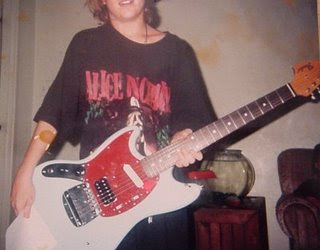 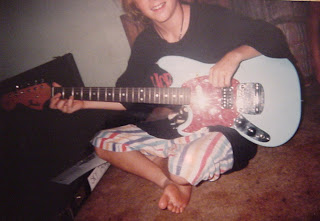 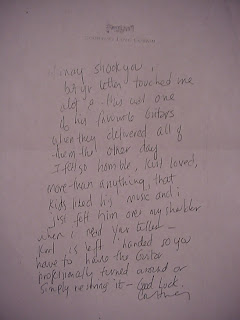